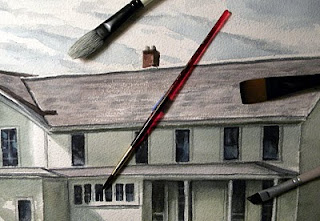 Brushes are to a painter what hand tools are to a carpenter. Each one has a unique function and it pays to use the right tool for the right job. For instance, in this painting, I did the sky using the large, round tipped brush at the top. It holds a lot of water (and pigment), with a bit of a tip so I can 'draw' the edges of clouds. By contrast the red-handled brush has a very thin, sharp tip for doing fine lines, but it doesn't hold much water. The large flat tipped brush on the right is great for 'dry brush' technique; essentially using very little water, a bit of pigment and lightly draw the brush across the rough paper, leaving bits of white behind. This is good for indicating texture, like a shingled roof. Finally in this shot you see the angled tip brush in the lower right. It's great for sharp edges and rectangles, such as windows or doors. 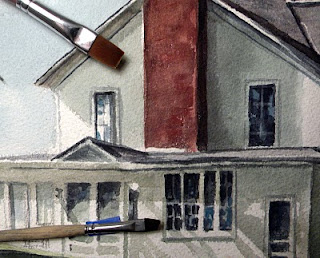 The flat tipped brush in the upper left isn't as large as the one above so I use it for smaller areas. It holds a good deal of water though so I use it for light washes, adding layer to layer, allowing the color underneath to show through, as on a wall. The small tipped brush (with the painter's tape showing!) is another angled brush, but it's even smaller so I use it for doing window panes and other small squares. 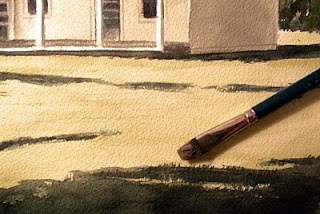 At the bottom of the painting, where you often find brush, trees, or grass, I call on one of my favorite brushes (oh yes, I even talk to them!) to do the job. This one is even more special since it's one my grandfather used and I inherited. I believe he trimmed it a bit so it would make rougher edges, such as grass in shadow, but it holds a lot of water so I can cover a large area quickly. 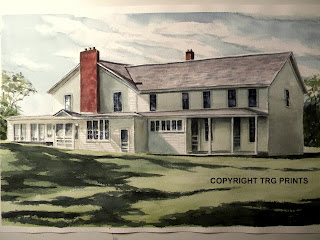 Here is the whole view of the painting. I am pleased by how the light turned out particularly. I've always admired Edward Hopper's work and the way he handled light on buildings. (Grandpa Garfield copied a number of Hopper's works, so he must've liked Hopper, too.) This house we saw during a family reunion in upper Michigan. I think it was used for Coast Guard members, but that's a guess. Lake Michigan is only a few hundred yards from the front of the house. Thanks for looking! Your comments are always welcome!

Labels: Behind the Scenes, Tips and Techniques