South Grain Elevators II (Start with one below) 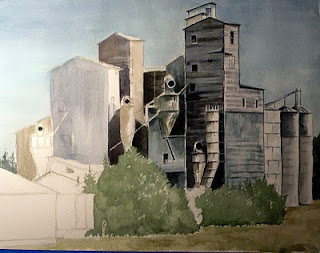 Now I've largely finished the right hand side and will work from the center out to the left. There is no rhyme or reason for this other than I like to establish the center first, it sort of anchors the painting for me. 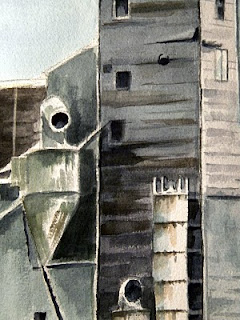 Speaking of the center, this is a close-up to show you the way I put on the paint - watercolors generally are not meant to be viewed this up-close and personal; they do better from a distance, sort of like the Impressionists' work. But by way of illustration it shows the layering and coloring of the washes. As I've said before, this is not meant to be architecturally accurate - rather to evoke a feeling with just enough description. 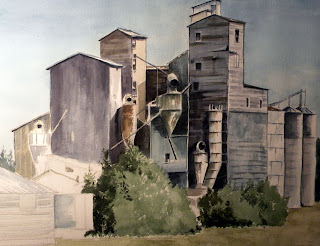 As I move left, I did up some values on the foliage out front. I really like the juxtaposition of creation with man's works. Not to mention I just wanted more green in the painting! 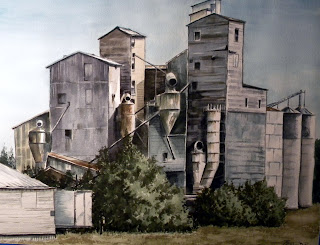 Ta-da! The end result. I feel pretty good about it - I think it balances well. The white shed and semi-trailer are similar in light and value to the two grain storage units on the right. Perhaps some day one of the guys who used to work here would look at this and say, "Good grief! That pipe never went that way!" But I don't think that's going to happen - if it did, I'd just say, "Now it does!" Thanks for looking! God bless!

Labels: Behind the Scenes, Industrial Moscow